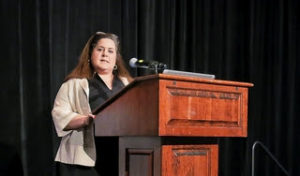 NAPLES, Fla.— The U.S. House of Representatives is likely to see some changes in midterm elections this fall, which could have repercussions for the polyurethanes industry, said Stephanie Silverman, CEO of Venn Strategies L.L.C.

Silverman outlined the current state of Washington politics heading into midterms during her presentation “Inside the Beltway: Policy, Politics and Perspectives from D.C.” at the 2018 Polyurethane Manufacturers Association annual meeting on May 8 in Naples.

“I’m going to tell you that in 33 years of doing this, I have never seen some of the things that I’m seeing right now, but they make for interesting speeches,” said Silverman, a lobbyist who represents mostly mid-size companies.

As the midterm cycle gears up, the elections will steal some of the momentum from policymaking in D.C., Silverman said. With a two-year cycle, the most active time for legislation and policy comes in the six months immediately after an election. After that point, the focus often turns to messaging.

After passing a budget bill in February, the next bill that could be major legislation for Congress is a government funding bill to be passed Sept. 30, “to keep the lights on, basically, for a few months,” she said.

“That could be a big piece of legislation, because if you know something is going to get done, you’re going to want to try to tag on other stuff to it,” Silverman said.

Beyond that bill and some smaller measures, other major legislation is not likely to be finished for the rest of 2018, she said.

“So what is Congress doing? They’re messaging,” she said. “They’re working on pieces of legislation that they know are not likely to get done and wrapped up in a bow, but they can go home and tap some advances as part of their bona fides to get re-elected.”

Silverman said Republicans in the House of Representatives are struggling, looking to pass legislation regarding the opioid epidemic or a balanced budget, but division within the community itself is complicating the situation.

“This, by the way, is one of the signs that the Republican party is in particular trouble, because there’s huge fissures within the party,” she said.

Silverman said one area where Republicans “kind of got a big hit” this year was with tax reform. Though the response hasn’t been as strong as they might have liked, they liked the messaging in the marketplace after the bill was passed. House Republicans could look to do more work on tax reform to continue that message into midterms.

“They probably won’t get a lot, but again, it’s a messaging play. It’s not really intended to legislate,” she said.

Regardless of how much Congress shifts in the midterm, more action could happen during the lame duck session, or the period of time between the results of the election and the starting date of new congress members, she said.

Silverman said about 40 percent of all substantive legislation done in the past five Congresses has been done during a lame duck period.

“If there’s a lame duck session and the party in power loses, or the spotlight’s not on you anymore because everything you’re doing is not under the filter of whether you’re going to get re-elected, you can actually do stuff,” she said. “And if you’re really motivated, you can do a lot.”

As Congress shifts to prepare for elections, more action is likely to be taken on by President Trump’s administration, she said.

The White House has been very active in energy and environment issues, and in spite of some Environmental Protection Agency leadership challenges, there has been activity rolling back some regulations, Silverman said. Trump’s executive branch also has been active in trade, and active rhetorically in infrastructure.

“I would say that the less Congress does, the more the executive branch does,” she said.

But the White House has had a historic level of turnover among its leadership, with nine cabinet-level officials to date, including firing-by-Tweet, Silverman said.

“If you had a third of your leadership leaving at any given time, it would be really hard to get stuff done,” she said. “Plus, morale for the troops is not so great anymore. Yet nine cabinet-level officials have left since the beginning of the Trump administration. This is higher turnover in the executive branch in the top ranks than ever in history.”

That turnover also puts pressure on Congress to approve additional appointees to fill the ranks, she said. Of positions that must be confirmed by the Senate, about 200, or about 40 percent, remain unfilled. Of about 5,000 career official or senior political jobs, about 2,000 are unfilled.

Another official potentially leaving is Scott Pruitt, EPA administrator, she said, who has been at the focus of allegations of impropriety.

“You don’t get that much bad press and kind of stick it out. It doesn’t work that way,” she said. “He’s got quite a reputation inside Washington for making a big fuss, having a lot of entourage and spending a lot of money. But something about Scott Pruitt appeals to the President, because he has not yet tweeted out Scott Pruitt’s resignation.”

Silverman said Trump’s relationship with social media and the media in general is also an obstacle to reaching policy goals.

“There are constant distractions,” she said. “Whether they’re true or whether they’re fake news, it doesn’t really matter. It takes up a lot of space and a lot of air, and gets in the way of the executive branch doing more on policy and less on defense, or thinking in a forward way about where they want to be next. That’s hard.”

As far as midterm math goes, Trump will probably be similar to past presidents, losing many seats in Congress in their first midterm if the president’s party controls both bodies, she said. The Senate is likely to remain controlled by Republicans with a tight split, as of the 34 senators running for re-election, 26 of those are Democrats and 10 of those are in states where Trump won by at least 10 points.

“We’re in May. As of today, 73 members of the House and Senate are not running for re-election,” Silverman said. “Some of them may not have wanted to leave so early, but have been encouraged out, but most of them are just over it.”

Of those, 10 chairs of committees, about 25 percent of total committee chairs in Congress, are leaving, she said.

“This is huge, because then you lose all sorts of institutional knowledge,” she said. “I know for those of you who get excited about the idea of draining the swamp: It’s a balancing act between getting rid of the muck, and keeping people who actually know something.”

This turnover could be especially tough on industries where members of Congress might not easily understand the intricacies of the business while making policy, she said.

“Your industry, it’s not easy-peasy. It’s not like you can just walk in and understand all the dynamics of polyurethane manufacturing,” she said. “It’s complicated, and you have complicated issues. So how long does it take a member of Congress to understand all this stuff? Probably they won’t get it on the first time. Like with marketing, you have to hit them again, and again, and again, same with staffers.

“But when they’re there for long periods of time, they’re institutional allies. When they’re just out of there, it becomes challenging.”

Of the committees affected, the U.S. House Committee on Energy and Commerce will lose eight members from its 55, which “doesn’t count others who may not win their seats in the re-election,” she said.

But as a whole, Congress is likely to see a lot of change later this year, which could mean more energy put into networking for industry professionals, she said.

“We are going to see massive transition in Congress,” she said. “Some of you may be happy about that, right? But there’s a downside to a mass transition, also. For us, for any industry, it means that all the people you built relationships with, all the staffers, all the members of Congress who know you, lots of them are not going to be there anymore. It just means a lot more work to ramp up again.”

One notable retirement is that of Paul Ryan, speaker of the House, which also doesn’t send a positive message to party members or voters, she said.

“Whether you like Paul Ryan or not, this has been a difficult environment to lead in,” Silverman said. “He has not been much of a success. He has not rallied his own members, and he has had a very tough time closing the big gap between the Tea Party, Freedom Caucus members and the more traditional Republican establishment members.”

Democrats are feeling excited about the upcoming midterms because of an energized voter base, redistricting such as in Pennsylvania and a total of 25 House Republicans running in districts that were won by Hillary Clinton in the 2016 presidential election, Silverman said. Democrats also are outraising Republicans, and have been outperforming Republicans in recent special elections.

For the upcoming midterms, there are three likely scenarios, Silverman said. First, Democrats could pick up seats in the House, but not enough to take control. Generic ballot polling places Democrats ahead of Republicans by about 6 percentage points, but that gap has been larger. If Democrats do narrow the gap, it makes policy that much more difficult, as “there are so many subfactions that you’re going to have to make some very weird friends in order to govern.”

The possibility of a “wave” of Democrats taking control with a margin of five to 20 seats is more popular, Silverman said.

“That’s enough to have real control,” she said.

But even though Republicans have had their headaches mending gaps among its own groups, Democrats also have subfactions to work with, she said. Some super-progressive Democrats could make for an interesting fight for leadership in the next House.

The third possibility, of Republicans losing more than 45 seats, would mean massive change in Democrat political dynamics, she said. If that happened, it could actually serve to create legislation, in shifting the relationship between Trump and the House.

“It’s been hard for Republicans in the House to advance Trump’s agenda, or for Trump to quietly let Republicans do their own thing. Neither of them seems very good at it,” she said. “But sometimes you get further when you have someone to argue against. … I think Trump and a Democrat House would be a really interesting sparring match, and you might see some really interesting policy come out of it. And there’s more similarities on issues like trade, right?”

Silverman said that though the “wave” result is most likely, “I think that at the end of the day, what we’re going to end up with is people ruling at the margins, which is not so different from what we have now.”

In the meantime, Silverman said she hoped Congress could avoid an impeachment process, which would be “bad for the presidency, it’s bad for the institution, it doesn’t make policy-making in Washington any more robust,” she said.

“As long as we can stay away from those things, I think we end up with two years of not so many differences, except maybe a more dynamic relationship between the White House and Democrats,” she said.